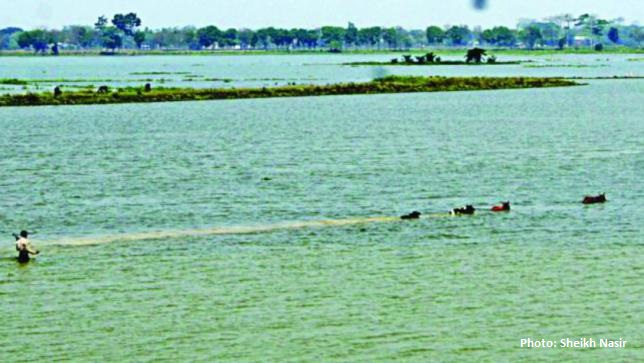 The haor basin in the northeastern part of Bangladesh is currently experiencing severe flash floods, causing considerable hardship to people, and destroying crops and other infrastructure. Some people are asking if this flood can be attributed to human-induced climate change.

Firstly, it is important to distinguish weather events (like rains, cyclones and floods, etc.) from climate. The former happens on a short timescale (several days) while the latter happens in much longer timescales (months and years).

The weather can change from day to day but the climate changes over months to give us different seasons each year.

Both weather and climate vary over time in a natural pattern and have done so since the beginning of time. However, in the last few decades we have begun to see a change in the patterns which is possibly due to the fact that since the Industrial Revolution almost two hundred years ago we have been emitting greenhouse gases, mostly carbon dioxide, from burning fossil fuels like coal, petrol and natural gas.

These greenhouse gases trap the sun’s heat and raise the temperature of the atmosphere above what it would normally be. Already the global mean temperature has been raised over one degree Celsius above pre-industrial levels.

This may not seem very much as temperatures can vary by over ten degrees between day and night every day. However, even a few degrees of rise in the global mean temperature can cause considerable adverse impacts around the world.

That is why in the Paris Agreement on climate change all the countries of the world have agreed to keep global mean temperatures below two degrees and if possible below 1.5 degrees.

When it comes to attributing the adverse impacts of climatic and even weather events to human-induced climate change, it is not as simple because not all events or all climatic impacts are equally related to atmospheric temperature increases.

I will give below a description of which climatic events are more easily attributed to climate change and which are more difficult (starting with the most easily attributable).

As the main effect of greenhouse gases in the atmosphere is a rise in the atmospheric temperature globally, it is logical that increases in hot days and even heat waves are the most easily attributable to climate change.

The second most easily attributable impact is global sea level rise, which is due to the thermal expansion of the ocean together with melting of glaciers and ice caps in Greenland and Antarctica. In Bangladesh we are already seeing the impacts of this in our coastal areas where people are suffering from salinity intrusion into drinking and irrigation waters.

The third most easily attributable impact is the severity of cyclones (but not necessarily their frequency) as the higher the sea surface temperature during a given cyclone, the more severe is the cyclone.

The next adverse impact that can be attributed to climate change is droughts, especially repeated or prolonged droughts. In the Barind Tract in the northwest of Bangladesh, we have droughts for part of the year but in the global context these are not really considered as severe droughts.

In fact, right now the eastern part of Africa is suffering from a very severe drought which is putting tens of millions of people at risk which, if not tackled in time, will almost certainly unleash one of the biggest migrations in decades.

Finally, the most difficult impact to attribute to climate change is floods. This is because the changes in hydrology due to increased atmospheric temperatures vary by region of the globe. Each region needs to be modelled separately as global models are not good enough at these scales.

The regional models for the South Asian Monsoon region (in which Bangladesh falls) show that the potential impact of climate change is not likely to enhance the overall precipitation over the twelve months of each year, but rather change the pattern of rainfall so that we will have more intense monsoons and longer drier seasons.

Hence, paradoxically even if the overall amount of rainfall during the year does not change much, we will still face more floods in the monsoon season and also longer droughts in the dry season.

A final aspect that compounds the difficulty of attribution of climate change to floods is the fact that there are many different kinds of floods, each with a different level of attribution.

Thus, as far as the question of whether the current flash floods in the northeast can be attributed to climate change is concerned, it is possible but not with a great deal of certainty.

What is possible to say with a great degree of scientific credibility is that Bangladesh is vulnerable to almost every one of the adverse climatic impacts mentioned above and hence we can expect all of them to become more severe as well as more frequent in future years.

This has enormous implications for all our future national and regional plans. Hence, business-as-usual plans and actions will no longer be good enough.

Originally this article was published on May 03, 2017 at Daily Star. The author Dr. Saleemul Huq is the director of the International Centre for Climate Change and Development (ICCCAD) at the Independent University, Bangladesh (IUB).
Email: saleem.icccad@iub.edu.bd