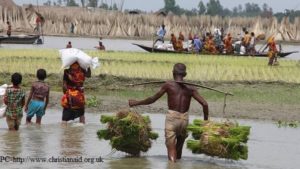 I have just returned from Kampala, Uganda, where I attended the 11th International Conference on Community Based Adaptation (CBA11), where around 300 participants from over fifty countries came together for a week of discussions and knowledge-sharing on how the most vulnerable communities around the world are already taking action to tackle climate change at the local level.

This conference series started in Bangladesh over a decade ago and has been held in Vietnam, Tanzania, Nepal and Kenya in previous years. The 10th CBA conference was held in Dhaka last year on the theme of enhancing resilience of urban communities.

Over the last decade, many lessons have been learnt and shared amongst the participants which have enabled us to take a new initiative at CBA11 to consolidate that knowledge and share it on a much more systematic basis going forward.

Hence, on June 26, in Kampala, we launched the LDC Universities Consortium on Climate Change (LUCCC) with the Chair of the LDC Group and the Vice Chancellor of Makerere University who hosted CBA11 along with the Government of Uganda.

This new LUCCC initiative is a South-South, LDC-specific, adaptation-focused, capacity-development programme which will be jointly managed by the International Centre for Climate Change and Development (ICCCAD) at the Independent University, Bangladesh (IUB) and the Makerere University Centre for Climate Change Research and Innovation (MUCCCRI), along with other partner universities in ten LDCs, who will in turn engage with other universities in their respective sub-regions in Africa and Asia. Thus, by using a hub-and-spoke approach all 48 LDCs will be covered over the next few years.

The objectives of the LUCCC are to implement Article 11 of the Paris Agreement on Climate Change which focuses on the need to develop in-country capacity-building systems in each and every country to enable them all to tackle climate change by 2030.

The LUCCC initiative aims to enable exchange of faculty, researchers and students across the LDCs to start with, but also with other universities in non-LDC developing countries as well as developed countries over time.

The student-to-student exchange of knowledge and activities has already been started by the students of Makerere University who held a separate Youth Conference on Climate Change in parallel with CBA11 in Kampala with cooperation and participation from youth from Bangladesh and other countries. Each of the LUCCC universities has agreed to hold an annual national youth conference in each of their countries where they will share knowledge on innovative practices to tackle climate change from the youth of other LDCs.

Another activity will be a LUCCC Fellowship Programme where young researchers and faculty from each LUCCC partner will be able to visit and collaborate with other partners in the consortium.

The overall objective is to no longer focus on the vulnerability of the communities and LDCs, but rather on the many innovations and solutions that they have developed and share that experiential knowledge with each other in a South-South and also South-North direction with other countries. Thus the LDCs, led by Bangladesh and Uganda, will be able to share their considerable experiential knowledge with the rest of the world and help the collective global efforts to tackle the adverse impacts of climate change.

Originally this article was published on  July 05, 2017 at Daily Star. The author Dr. Saleemul Huq is the director of the International Centre for Climate Change and Development (ICCCAD) at the Independent University, Bangladesh (IUB).
Email: saleem.icccad@iub.edu.bd