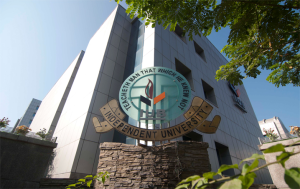 The Centre is based at the Independent University, Bangladesh. Founded in 1993, Independent University, Bangladesh is one of the oldest private universities in Bangladesh where academic excellence is a tradition, teaching a passion and lifelong learning a habit.  IUB currently has more than 4000 undergraduate and graduate students and over 3560 alumni. The student population is projected to grow at 10% annually.

Located in a country that is widely regarded as one of the most at risk from climate change, Bangladesh already suffers serious riverine floods, tropical cyclones, flash floods in the north east and water deficits in the North West. The aim of ICCCAD is to develop a world-class institution that is closely related to local experience, knowledge and research in one of the countries that is most affected by climate change. It is our mission to gain and distribute knowledge on climate change and, specifically, adaptation and thereby helping people to adapt to climate change with a focus on the global south. By focusing on such work in Bangladesh, ICCCAD allows international participants to gain direct knowledge of the issues in a real-world context. Through the expertise of ICCCAD and its local partners, international organisations will be exposed to relevant and grounded knowledge that can be shared and transmitted around the world for the benefit of other LDCs, and their governments, donors and international NGOs.

To gain and distribute knowledge on Climate Change and specifically adaptation and thereby helping people to adapt to Climate Change with a focus on the global South.