For the last three years, ICCCAD has been at the forefront of loss and damage research. The notion that there would be some impacts of climate change that extend beyond adaptation and mitigation, is not a new concept. In a proposal to the Intergovernmental Negotiating Committee – the body that negotiated the United Nations Framework Convention on Climate Change (UNFCCC) – AOSIS suggested that an international insurance pool should be created to compensate small island states for territory lost to sea level rise. While the proposal was ultimately dismissed, the word insurance survived in the text of the UNFCCC (or the Convention, as it is colloquially known). However, for the first decade of international climate change negotiations under the UNFCCC, the focus was on mitigation and the importance of avoiding the impacts of climate change by reducing emissions. When it became clear that mitigation efforts were not sufficient to avoid climate change impacts altogether, adaptation joined mitigation as a focus of negotiations, and became an area of particular concern to developing country parties. We have now entered the third decade of the UNFCCC, under the realisation that neither mitigation nor adaption efforts – at their current levels – are enough to prevent both current and future climate change impacts. As a result, there is and will continue to be loss and damage from the impacts of climate change.

ICCCAD has been involved in two major projects related to loss and damage. The first of which being the Loss and Damage in Vulnerable Countries Initiative initiated by the Climate and Development Knowledge Network (CDKN) and developed by Germanwatch, the Munich Climate Insurance Initiative (MCII), United Nations University-Institute for Environment and Human Security (UNU-EHS) working alongside ICCCAD. In this project, ICCCAD took a multi-faceted role to better understand loss and damage in the national context of Bangladesh helping to organize four stakeholder workshops and several technical papers undertaken by national researchers with expertise in a range of areas related to climate change and development (see Publications).

The second project is the Asia Pacific Forum on Loss and Damage which was started by ICCCAD and several other organizations and made possible by the Asia Pacific Network for Global Change Research (APN-GCR). The objective of the forum is to disseminate knowledge on loss and damage in the Asia Pacific region so as to create a community of practice among researchers. By providing a platform for discussion along with an online bank for loss and damage research, the forum hopes to shed light on the challenges and potential solutions to address loss and damage. Researchers are encouraged to send us links to their research to be included on the website as well as join in on our discussion via LinkedIn. Additionally, a bi-monthly newsletter will help to summarize research findings in the community to a larger audience including policy-makers, practitioners and stakeholders. 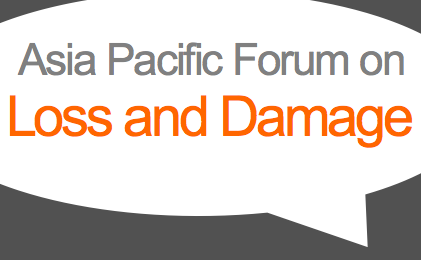