This short course was running in parallel with the 7th international Community-Based Adaptation conference (CBA7), and build into the conference special sessions specifically for course participants.

Monitoring and evaluation (M&E) is of increasing importance for all organisations – from NGOs through to major donors, especially in regard to ensuring “value for money”. “Upward” accountability tends to be looking at how donor funding is used and spent, and is often included in projects as a separate activity carried out at the end (when it is too late to fix things that may have gone wrong). A key issue for CBA is “downward” accountability, in which the people at the grassroots are themselves embedded in the monitoring (during the project activities) and evaluation (of the value and success of activities) throughout the process.

Overall the course drew on existing work done by the ARCAB (Action Research for Community Adaptation in Bangladesh) project, and related publications from CARE, IIED and other organisations that are at the forefront of thinking about M&E in the adaptation context, alongside the CBA conference.

On day one questions of: How urban communities organise and mobilise to address a broad range of the challenges they face and how have local governments incorporated experiences of those communities or involved the groups in ways that brings community-based adaptation into the urban mainstream, were asked among many more.

On day 3 The Former President of Ireland, Mary Robinson, introduced the session. She said that the rule of law needed to be brought into the climate change process at the local, national and international levels in order to protect rights, reduce risk, build resilience and empower people. Robinson also discussed the Climate Justice Dialogue, which the Mary Robinson Foundation has established with the World Resources Institute.

On the final day Terry Cannon from the Institute of Development Studies, UK said that he was going to throw out some controversial thoughts and urged participants to “think big.” He said we need to create linkages between climate change and previous climate change work and felt there was very little reflection on what we mean by community. What does it mean? Cannon said we don’t have enough top down policies. Actually we should be doing much more. The problem is that “the community is worshipped”. “So long as we put community-based in front of the name we think we have it covered”, said Cannon. He wants to challenge that. Is community sufficient as a basis for climate change adaptation?  Leaving the conference participants with much to think of. 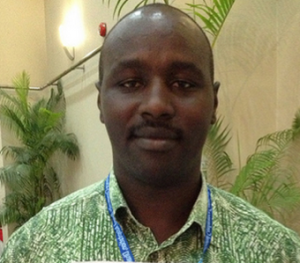 I am now in a position to develop an M&E tool to evaluate myself, and I have been evaluating my abilities throughout the course and conference. There are 2 outputs I have been able to capture; the course has given me the confidence to participate in any M&E forum, and secondly it has been great to see that other government officials at this conference have been in the position to contribute to review of plans and policy documents in Kenya with respect to CBA, and lastly I met many friends from whose practical experiences I have learned from,  & will be able to share with CBA stakeholders in Kenya