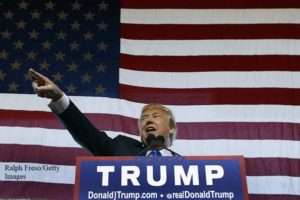 Since the announce-ment by President Trump that the US will withdraw from the Paris Agreement to tackle climate change, he has been facing a whirlwind of push backs and rejection by all the 195 countries who are parties to the Paris Agreement (only Syria and Nicaragua did not sign it), and it looks like the US will be on its own on this issue from now on, and is already being termed a rogue state by many.

I want to focus on a little known Article of the Paris Agreement, which may well come to haunt the US and will be an unintended consequence of the US withdrawing from it.

This is about Article 8 of the Paris Agreement, which is on an issue called Loss and Damage from climate change, a fiercely fought topic in the negotiations going into Paris which was not resolved until the last hour of the final agreement in Paris at midnight on December 12, 2015.

Before going into the 21st Conference of Parties (COP21) to be held in Paris in December 2015, under the United Nations Framework Convention on Climate Change (UNFCCC), there were a series of negotiations to prepare the final negotiating text which would then be finalised over the two weeks of COP21.

Going into Paris, every Article had some proposed text from the developed countries (called option 1) and another few paragraphs of text from the developing countries (called option 2), and in many cases, the two options presented opposing ideas. The idea was that all countries would spend two weeks in Paris at COP21, finding a compromise text between the two opposing options to emerge with a consensus text as part of the Paris Agreement.

However, the exception to this pattern was Article 8 on loss and damage where the developing countries proposed a few paragraphs of text, but the option from the developed countries wasn’t just to offer no text but to instead propose that this Article be deleted completely!

Why was this the case?

The reason is because the issue of loss and damage from climate change refers to the residual impacts of human induced climate change when efforts to prevent impacts by mitigation have been insufficient, and also when efforts to adapt to those impacts are not enough either. The resulting impacts and the resulting loss and damage, thus, can be attributed to human induced changes to the climate.

In such cases, the loss and damage is no longer due to natural causes but due to human interference in the climate system. Hence, there is a potential liability and claims for compensation to be made by the victims against the polluters.

That is why the developed countries had fought tooth and nail to refuse to accept any discussion of liability and compensation in the UNFCCC talks for over twenty years. However, the breakthrough came at COP19 in Warsaw, Poland in 2013, where they were forced to accept the setting up of the Warsaw International Mechanism on Loss and Damage (which was understood to be a euphemism for liability and compensation).

So coming in to the COP21 talks in Paris in December 2015, the developed countries did not want to accept a new separate Article on Loss and Damage in the Paris Agreement at all. Hence, this Article became one of the most politically charged and sensitive issues in the COP21, talks. The developing countries, led by the small island developing states and the Least Developed Countries (LDC) group, in which Bangladeshi negotiators played an important role, pushed to include loss and damage in Article 8.

After very hard negotiations for two weeks, initially at the level of the technical negotiators and then ministers, it was still not resolved until the last few hours of COP21 when Prime Minister Enele Sopoaga of Tuvalu, on behalf of the developing countries, and US Secretary of State John Kerry, on behalf of the developed countries, requested their negotiators to leave the room and agreed on the final text that was eventually accepted as the Loss and Damage Article 8 of the Paris Agreement.

The reason that John Kerry of the US finally accepted Article 8 on Loss and Damage was because the Prime Minister of Tuvalu allowed him to insert a paragraph into the COP21 decision associated with the Article which specifically stated that Article 8 of the Paris Agreement could NOT be used to claim compensation on the basis of liability from the polluting countries. This was specifically inserted to protect the US from potential future claims for compensation once loss and damage from climate change is established.

So as per President Trump’s announcement when the US officially withdraws from the Paris Agreement, the US will lose the protection of this clause and hence will be open to claims for compensation from people, communities and countries that suffer loss and damage that can be attributed to human induced climate change. I am not sure if any of President Trump’s advisers told him about this unintended consequence of his decision to leave the Paris Agreement!

Originally this article was published on June 05, 2017 at Daily Star. The author Dr. Saleemul Huq is the director of the International Centre for Climate Change and Development (ICCCAD) at the Independent University, Bangladesh (IUB).
Email: saleem.icccad@iub.edu.bd